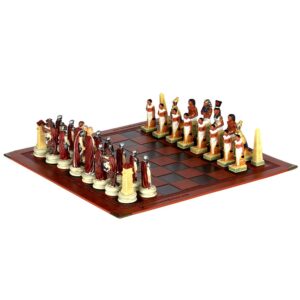 Figures have both anime style and is marked with their equivalent chess figure image at the bottom of the figure, making it easier to play.

Pieces: 32 chess pieces, sold with a chess board.​

1 in stock (can be backordered)

Have you ever wanted to play chess with an anime character? Now is your chance!

This Dragon Ball Z Collector’s Chess Set will make any fan of the anime series happy.

The pieces are designed after those from both Hero and Villain sides in their favorite battle: between good guy Goku vs baddy Vegeta, or even more specifically which side they were on during each episode (heroes get blue squares while enemies have red).

White Anime Chess Pieces – Hero Characters include:
Goku as the King
Vegeta as the Queen
Gohan & Piccolo as the Bishops
Gotenks & Future Trunks as the Knights
Android 18 & Krillin as the Rooks
Super Ghost Kamikaze as the Pawns.

Black Anime Chess Pieces -Villain characters include:
Buu as the King
Cell as the Queen
Frieza & Android 19 as the Bishops
Raditz & Nappa as the Knights
Bojack & Broly as the Rooks
Saibaiman as the Pawns.