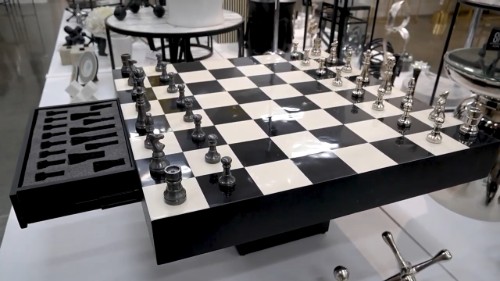 See below for our selection of Black and White Chess!

The 64 squares of the chessboard, which is colored in a checkered pattern, are likewise referred to as “white squares” or “light squares”, and “black squares” or “dark squares”, though usually the squares are of contrasting light and dark color rather than literally white and black.

Players will enjoy this stylish Staunton set of chessmen for blitz chess, casual games, and club play. The low center of gravity and triple weight make it a solid choice for speed chess games.

Ideal with any standard 20″ vinyl rollup chess board or your chess board of choice that has 2 to 2 1/4″ squares.

Pieces: 32 chess pieces, sold with board. 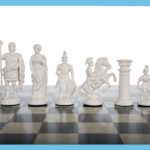 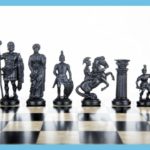 Pieces: Chess pieces have a color of black and white, sold with a folding chess board.

Bold Chess Set is made from metallic Black v Arctic Shadow .With a total of 34 chess pieces that is hand-carved, gloss-lacquered wooden pieces, the King measures 10.2cm or 4″ in height with a diameter of 4.8cm in base that weighs 75g or approximately 2.65 oz. Chess board is included in the package and made of black Anegre, Bird’s-eye Maple, Boxwood, lacquer, Italian Nappa leather, 18 carat gold that measures 55 x 55 cm. These limited edition 64 sets. Bold Chess V4 chess pieces are painted and finished in London, England in specially selected limited edition colours. 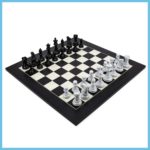 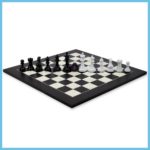 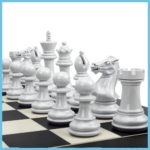 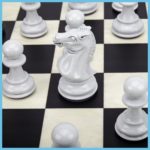 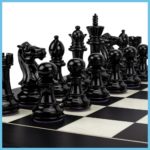 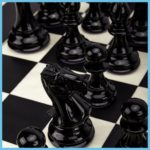 Package includes our single weighted Value Club Plastic Chess Set with a 3.75″ king and our Value Vinyl Rollup Chess Board with 2 1/4″ squares. Chess pieces are made from a durable, glossy plastic which makes a nice contrast against the black and buff chess board. Pieces have green felt paper pads and spare queens are included! Pieces come packaged in heavy zip lock bags.

This hand made chess set is a truly modern work of art. Imported from Italy, it features the stark contrast of white and black pieces in an ultramodern design; the king measures 3 3/8″ in height with the base of 3/4″ that weighs 1.3 oz. The two colors are broken up by imbedded lines of other colors as well as detailing such as the cross on the top of the bishop. The chess board is also white and black and raised on cylindrical feet that follow the design of the chess pieces themselves with overall dimensions of 12″ x 12″, chess board squares measures 1 1/2″. If you are looking for an ultramodern design sure to turn heads, this is certainly a great option. The close proximity of the pieces makes it a little less suitable for regular play, so we recommend it as primarily a display piece.

Beautiful contrasting metal and wood chess set is fun to play at home and proudly display. Pick up this incredible lacquered board with beautiful pieces today! Another amazing production from Italfama in Florence Italy, brought to you by Chess House. 32 chess pieces including 3 inch tall Kings. Chess board is usually included when you ordered this type of chess set, it made from lacquered finish that measures 15 3/4″ with 1 3/8″ squares.

Born out of a love of architecture and chess London designers Ian Flood and Chris Prossner have reimagined the chess set by taking the classic game pieces and replacing them with miniature renditions of famous New York buildings. In the New York Skyline Chess Set a range of buildings from across the city some of which capture the essence of the early 1900’s construction boom and the growth of skyscraper architecture through to their more contemporary counterparts along with some of the cities most recognizable silhouettes make up the set. Freedom Tower is the King with the Empire State Building as its queen. The Flatiron Building portrays the Knight with the Guggenheim as the rook. A row of Brownstone houses stand as the pawns. The 32 piece NYC Skyline set is cast in injection moulded acrylic. Each piece is double weighted and has a soft felt base. Finished in classic black and white this stunning set is the perfect creation for someone looking for a unique piece of design. Each set comes complete with a 16 x 16 folding board and presentation box

Pieces: 32 chess pieces, inspired by the New York Skyline, chess board is included.

In chess, the player who moves first is called “White” and the player who moves second is called “Black”. Likewise, the pieces that each lead are called respectively “the white pieces” and “the black pieces”. “The pieces are often not literally black and white, but other colors (usually a light color and a dark color, respectively). The 64 squares of the chessboard, which are colored checkerboards, are also called” squares. white “.” light squares “and” black squares “or” dark squares “, although generally the squares contrast with light and dark colors rather than literally black and white. For example, the squares on plastic boards can be whitish (“buff”) and green, while those on wooden planks are often light brown and dark brown.