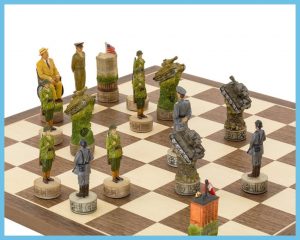 See below for our selection of  World War II-Themed Chess Sets!

Chess. A game representing battling armies. There is one conflict in recent history that is considered THE conflict. THE war. World War II is of high importance to today’s balance of forces and today’s world map. There are very few countries which have not been involved in the war, one way or another. And so today we shall have a look at some of the best World War II-themed chess sets.

Let’s begin with one Japan versus the US chess set, or in other words, a

On 7 December 1941 Japan conducted a surprise attack on British and American forces in south-east Asia and central pacific. In particular, one of the attacked positions was the Pearl Harbor naval base, which was the immediate cause of the US’ entry into the war.

Pearl Harbor is considered one of the major foul plays of the World War 2, but also one of the more important turning points of the war. Attack or defend, it is your choice.

Oh, and as a side note; while in this chess set the Japanese appear to be black, it would be more appropriate to treat them as white, as they were the first to attack in the historical events that inspired this set. Also, sets similar to that one are available from a few different vendors, as this is a surprisingly popular theme. They usually differ in material quality and colouring accuracy. Caution is advisable, as some of the cheaper versions tend to be really poorly made. 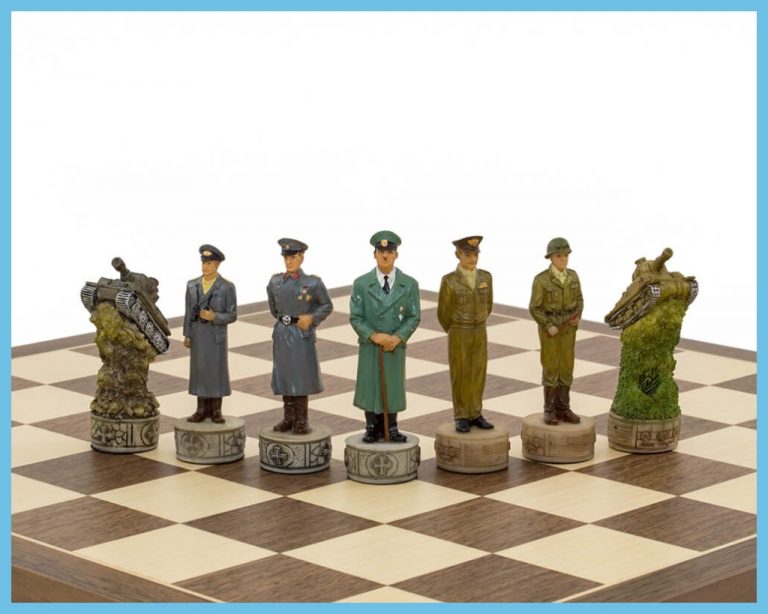 This ww2 Chess set is fairly similar to the set above in terms of the general design. Roosevelt is again the king, however, the pawns are of distinctly different appearance – this time they are infantry, not marines. On the other side, there is Hitler as the king and Nazi soldiers as the pawns.

One thing that may be seen as a little disappointing for the hard-core history enthusiast is that the distinctions on the Nazi side have been removed – that is, there is no red arm-band on Hitler, nor are there any other symbols that would have been historically appropriate. And the replacement of the flag over Reichstag (rook) with a Swiss flag seems like a particularly inappropriate move.

Of course, due to the ban on Nazi symbols and symbolism which certain countries enforce may render such inaccuracies necessary – for example, Russia has taken this to the extreme. If you want a set without such inaccuracies it may be necessary to re-paint a chess set yourself – but before doing that it is better to make sure that it is not prohibited by the law of your country.

This set is available in two sizes, and it is usually sold without a board. 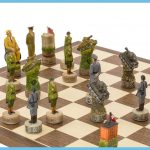 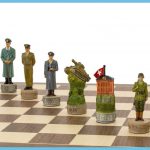 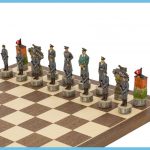 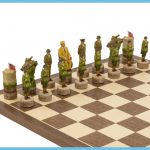 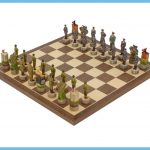 Nazi Germany and Soviet Russia fought together for a certain time, as agreed in Ribbentrop-Molotov pact, or the Treaty of Non-aggression. However, this pact was breached in 1941, when Germany has begun Operation Barbarossa and attacked Russia. Though, an interesting but little-known fact is that, when one analysis Russia’s preparations and troop movement just before that moment, it becomes apparent that Stalin was likely preparing to launch an offensive himself. It may have been planned to occur later, but nonetheless; it appears that the plans for an attack were there. This issue is one of the major controversies among world war II historians.

But this digression aside…

This ww2 chess set manufactured from hand-painted resin with alabaster is certainly one of a little higher quality. One of its advantages is the fact that there are no historically inaccurate symbols used; while certain symbols are also avoided here, there are no such inaccuracies as substituting a Swiss flag for a Nazi one.

Certainly, it is one of the sets that will not feel bad to look at, and it can certainly be displayed. On the other hand, one of its drawbacks is the fact that it is usually sold without a board, so should you want to play chess with these pieces, you might need to purchase a board separately. 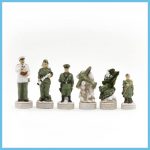 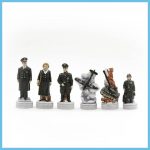 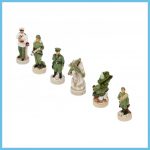 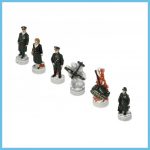 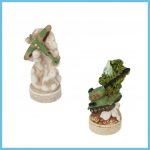 Hand-painted resin with alabaster, around 4” each.

This is not actually chess, however, it is still a chess-like game involving a good deal of strategic thinking. And it is indeed an interesting concept, so while it does not really fit the theme, let’s include it anyway.

If you are interested in world war two primarily from the point of view of a tank warfare enthusiast, you must have heard of the Battle of Kursk, which was the greatest tank battle of said war. With this game, you may re-enact it, and perhaps tip the scales the other way!

This chess-like game may be particularly appropriate for the younger ww2 enthusiasts.

And now, just to wrap it up, let’s have a look at one particularly interesting vintage ww2 era chess set;

Of this ww2 era set, there have been manufactured two different versions; one version was “normal”, designed for soldiers, so that they would have something to relax within their free time.      The other version, however, was designed to be sent to soldiers in PoW camps, and it contained a miniature compass hidden in one of the pieces (the little circle visible on a piece with the drawing removed), and a map pasted on the inside of the cardboard tube.

Cardboard sets superficially similar to this set have been manufactured through the war in many different countries. Germany had its own cardboard sets, the UK and the US had theirs.  However, due to its dual purpose, this set is even more interesting and unique than pretty much any other set manufactured during the war.

Very few of these sets still survive as they hadn’t been made of particularly durable materials. However, if you are looking for something really special of that era, this is one of the most interesting chess sets that can be found.

The Second World War is the deadliest conflict in human history, one of unprecedented scale in all regards. Its shadow can still be felt over the geo-politics of today. It is true that some may consider selling chess sets in  this theme a little risqué; in that light it is worth considering that

“those who cannot remember the past are condemned to repeat it”.

And what better way to remember the past than to get involved with it, in such a simple and innocent way?