Do you have a passion for both chess and diamonds?

If so, I have the perfect game for you!

Royal Diamond Chess are a unique variation of the classic board game that incorporates hundreds of sparkling gems into the playing pieces.

These make the game more aesthetically pleasing, but it also makes it more challenging as you try to capture your opponent’s crown jewels.

Whether you’re a seasoned pro or just getting started, Royal Diamond Chess will provide hours of enjoyment.

So why not give it a try?

You may find yourself addicted to these royal pastimes!

See below for our selection of Royal Diamond Chess!

What will You find here? show

Above chess set is a part of Charles Hollander Collection, one of the most respected names in the diamond industry. Wanting to pay tribute to their family involvement in jewelry they came up with idea of creating awesome luxury one of a kind items.

“I happened to share my dreams of elite objects with my designer Ms. Stolarsky and Beauty Gems’ Bernard Maquin, he recalls. I had in mind a collection which would show off the sparks of our diamonds”.

It has been created by Renowed French artist Bernard Maquin, and dubbed the most expensive Diamond Chess Set in the world, with worth said to be over $500,000. To be precise, a total of 30 jewelers spent over 4,500 hours creating the royal collection, all handmade. They used  approximately 9900 black and white diamonds weighing a total of 186 carats, 1168.75 gram of 14 carat white gold and 186.57 gram of silver.

Constructed of gold and platinum, it contains diamonds, emeralds, rubies, pearls and sapphires. The king piece alone weighs 165.2 grams of 18 carat yellow gold and has a spiraling mid-section graced by 73 rubies and 146 diamonds.

Valued at over £5 million ($9.8m USD), this single chess set is one ofthe most expensive and exquisite chess board that ever been created.

Interestingly, there suppose to be be a limited number of replica sets selling for about $26,700 USD.

It is said that a book and film script adaptations featuring The Jewel Royale Chess Set, with the title of “Checkmate”, are being worked on by an un-known, award winning British writer, though its hard to find any information about it.

While being shown in top class jewellery exhibitions, the set has received praises from leading designers and jewellers. “I would call them the most glamorous pieces I have ever crafted”, says Mr. Maquin, who was coordinating the production of another chess board in Bangkok.

The House of Solid Gold with Diamonds Chess Board

Made from diamond encrusted 18k solid yellow and white gold, the chess set is almost beyond opulent.

The board is built from beautifully arranged some 4.874 black and yellow-golden diamonds that outline the checks on the board, weighing a total of 125.5 carats.

Chess is often called the game of kings, and with The House of Solid Gold Gold Chess set with diamonds, it is now fit for one as well. 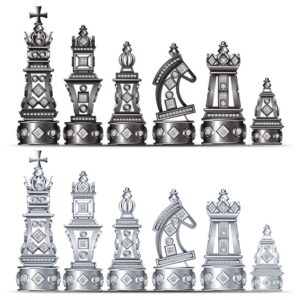 Diamond Chess Figures - [No further info on this neither] 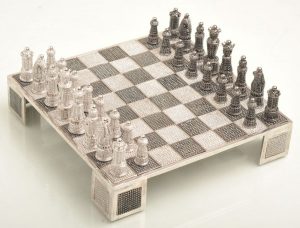 Royal Diamond Chess by Swarovsky(thou can't find any other info)

By now you must have know the current Diamond Chess inspirations available in the internet.

Let us know if you know any other Diamond Chess boards that should make the spot in the article, we’d be much welcomed to put any other luxury chess sets into it