Do you love chess?

Do you love robots?

Whether you’re a collector or a player, transformer chess sets will fascinate and engage you to like never before.

So what are you waiting for?

Get your hands on one of these amazing sets today!

Scroll Down for a list of Transformer Chess Set along with their pictures and prices in $.

What will You find here? show

If you’re a fan of chess or even just a collector of cool board games, you’ll want to check out these transformer chess sets!

Whether you’re looking for a new way to play chess or want to show off your collection, these sets are sure to impress.

So what are you waiting for?

Check them out today!

This fan-favorite Transformer Chess Collection is a must for those who are fans of this animated movie.

It includes 32 chess pieces which is 16 from the side of heroic Autobots and 16 villains Decepticons inspired from 1980s Generation One (G1) Transformers created specifically for the Kickstarter.

Each piece is digitally sculpted, then cast in metallic resin and painted by hand in attention to detail to perfectly copy the image of each character in the transformers.

Each piece is shown on their robot from as shown in the movie.

Transformer Chess Collection comes with chessboard measuring over 25 inches square especially designed to complement each pieces and have a real life battle in chess battle.

It designed with each side’s headquarters with the color of purple and orange- purple for the Decepticons and the orange are for Autobot.

The King represented as Optimus Prime. The beloved commander of the Autobots, Optimus Prime championed freedom in countless clashes across Cybertron – and Earth, where he adopted his famous truck alternate mode.

The Knight represented as Hot Rod. A young and brash Autobot with a race car alt-mode, Hot Rod eventually grew to lead the Autobots – as Rodimus Prime!

The Pawn represented as Bumblebee. The heart of the Autobots, Bumblebee was quick to befriend their human allies in his iconic yellow beetle alt-mode.

The Pawn is Prowl. The surly strategist of the Autobots, Prowl’s police car alt-mode suited his no-nonsense personality.

The King represented as Megatron. The feared leader and founder of the Decepticons, and the eternal nemesis of Optimus Prime, Megatron sought nothing less than complete iron-fisted domination of Cybertron!

The Queen represented as Starscream. The scheming second-in-command of the Decepticons, Starscream constantly plotted to overthrow Megatron.

The Knight represented as Soundwave. The loyal comms officer of the Decepticons, Soundwave gathered intelligence using his trio of cassette-minions.

The Knight represented as Shockwave. The ops commander of the Decepticons, Shockwave’s cold logic and laser-turret mode made him a deadly threat.

Pieces: 32 characters, chess board is included. 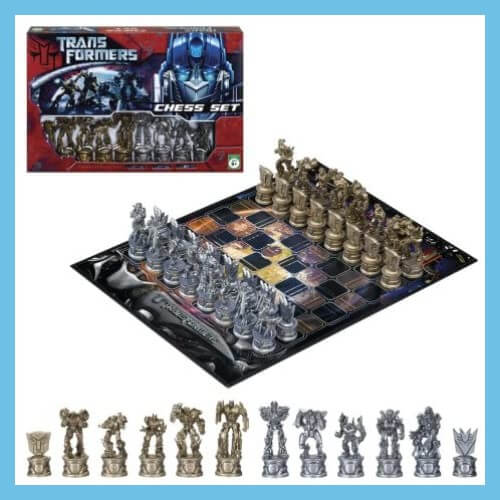 A great play will come in the way if you order this Hasbro Gaming Transformers Chess Set!

You will decide which side are you in, if you are on the side of Autobots or is it Deceptions?

Taken into another place of battlefield which will determine how well you play.

Each Autobots and Decepticons will have 16 pieces which includes 1 King, 1 Queen, 2 Knights, 2 Bishops, 2 Rooks, and 8 Pawns making it 32 chess pieces in equal.

Each character will have be in silver which is the Decepticons and in gold are the Autobots. 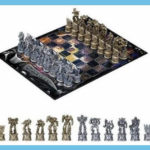 Chess board is included that measures 15.8” x 10.5” with a colors of light and dark which have a words of “Transformers” in the middle and on the edges is written Optimus Prime for the Autobots and Megatron for the Decpeticons.

Do you like the idea of transformer chess sets?

It’s such a cool concept and would make for awesome conversation pieces.

What do you think?

Are they something you would be interested in purchasing?

Let us know in the comments below – we love hearing your feedback!