See below for our selection of Winnie the Pooh Chess!

The first collection of stories about the character was the book Winnie-the-Pooh (1926), and this was followed by The House at Pooh Corner (1928). Milne also included a poem about the bear in the children’s verse book When We Were Very Young (1924) and many more in Now We Are Six (1927).

Maricon
☆☆☆☆☆
Hand Painted Winnie the Pooh Chess
Read More
bring back my childhood memories, i really like this sets.

In 1966 Walt Disney brought the stories to film and in 1977 the first feature length animated film of Pooh, ‘The Many Adventures of Winnie the Pooh’ was released. This chess set is based the characters Winnie the Pooh created by A.A. Milne and illustrated by E.H. Shepard, best fit for those people who loves Winnie the Pooh and loves chess game also, it could also be serve as a collection to those who loves Winnie the Pooh. It includes Winnie the Pooh, Kanga and Owl to Tigger, Eeyore and Piglet. This chess set has represented the King by Winnie the Pooh himself and the queen by Kanga, the sweet caring mother of baby Roo. The owl, supposedly the wisest creature in 100 Acre Wood, is the bishop and Eeyore, the gloomy grey donkey, is the knight. Tigger the bouncy is the Rook and Piglet, Poohs best friend, is the pawn. The King which is Pooh measures 3.5 inches and all the pieces are heavy weight because of the nature of the size and weight to balance the chess pieces; it also comes with chess board. 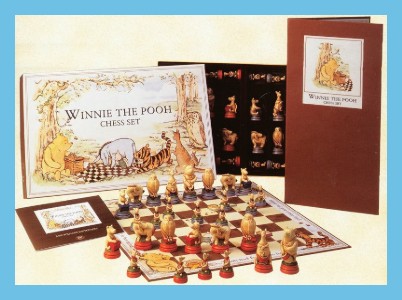 Chess pieces includes all the main characters from the stories are represented in this classically styled chess set, from Winnie the Pooh, Kanga and Owl to Tigger, Eeyore and Piglet. Winnie the Pooh himself is the king of this set and the queen is represented by Kanga, the sweet caring mother of baby Roo. The owl, supposedly the wisest creature in 100 Acre Wood, is the bishop and Eeyore, the gloomy grey donkey, is the knight. Tigger is the Rook and Poohs best friend Piglet is the pawn. This beautiful chess set appeals to all ages and comes complete with an illustrated board and a full set of rules.

Chess pieces are antique gold and antique silver that have felt labels on bottoms, each pieces measure 1 – 1.5″ each. Chess board is included in the package with a wood trim that measures 10″ x 10″ x 1.25″, it weighs 6+ lbs. 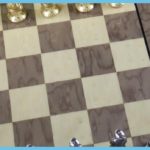 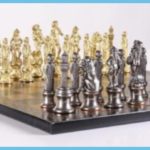 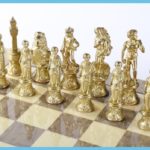 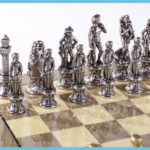 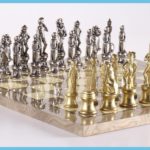 A. A. Milne named the character Winnie-the-Pooh after a teddy bear owned by his son, Christopher Robin Milne, on whom the character Christopher Robin was based. The rest of Christopher Milne’s toys – Piglet, Eeyore, Kanga, Roo, and Tigger – were incorporated into Milne’s stories.Two more characters, Owl and Rabbit, were created by Milne’s imagination, while Gopher was added to the Disney version. Christopher Robin’s toy bear is on display at the Main Branch of the New York Public Library in New York City.

Harry Colebourn and Winnie, 1914
Christopher Milne had named his toy bear after Winnie, a Canadian black bear he often saw at London Zoo, and Pooh, a swan they had encountered while on holiday. The bear cub was purchased from a hunter for C$20 by Canadian Lieutenant Harry Colebourn in White River, Ontario, while en route to England during the First World War.[5] He named the bear Winnie after his adopted hometown in Winnipeg, Manitoba. Winnie was surreptitiously brought to England with her owner, and gained unofficial recognition as The Fort Garry Horse regimental mascot. Colebourn left Winnie at the London Zoo while he and his unit were in France; after the war she was officially donated to the zoo, as she had become a much-loved attraction there.[6] Pooh the swan appears as a character in its own right in When We Were Very Young.

Statue in Winnipeg of Harry Colebourn and Winnie
In the first chapter of Winnie-the-Pooh, Milne offers this explanation of why Winnie-the-Pooh is often called simply “Pooh”: