“…And on the pedestal, these words appear:

My name is Ozymandias, King of Kings;

Look on my Works, ye Mighty, and despair!…”

Ancient Egypt has charmed western civilisation ever since the era of great archaeological discoveries on the banks of the Nile, and it still does charm us. Who hasn’t seen, who hasn’t marvelled at the pyramids of Giza? Who hasn’t heard of the Sphinx, and who hasn’t wondered whose hands built him? Who hasn’t heard of pharaoh Ramses II, or as the Greeks would say, Ozymandias?

However, in spite of all the monuments, there’s still precious little we know about the day to day life of people in ancient Egypt. What about recreation? For example, what were the games that they played? It is known that they have had a board game called senet, however the exact rule set is lost in the mist of time.

But what we do have is a more modern game, but themed like an ancient one. Ancient Egypt-themed chess should do justice to the great historic kingdom. So now you can indulge yourself a little, and get one of these beautiful egyptian chess sets, fit for a pharaoh!

This little selection of the more popular, and more interesting, sets out there, can also help you find something to get for your little – or big – egyptologist.

As far as chess goes, an interesting option to consider is a Rome versus Egypt set.

It allows you to replay the historical war between Egypt and Rome that in 30 BCE led to annexation of Egypt into Rome, and to the death of Cleopatra, the last active ruler of the ancient dynasties of Egypt. Truly those events had a profound impact on the culture and history – and now you can play them out your way for yourself!

This particular set is of the less expensive variety, however it should still make a nice addition to any egyptology enthusiast’s collection. Minimalist colouring does have its merits.

However, as is the case with most of the more exotic chess sets, it may be unsuitable for small children, as some people complain that the pieces are a little too easy to damage, and small parts may be a choking hazard. Pieces are made of polyresin, and each measures around 3.75”. Board is made of glass, measures 17”x17”. $69.99 at amazon. 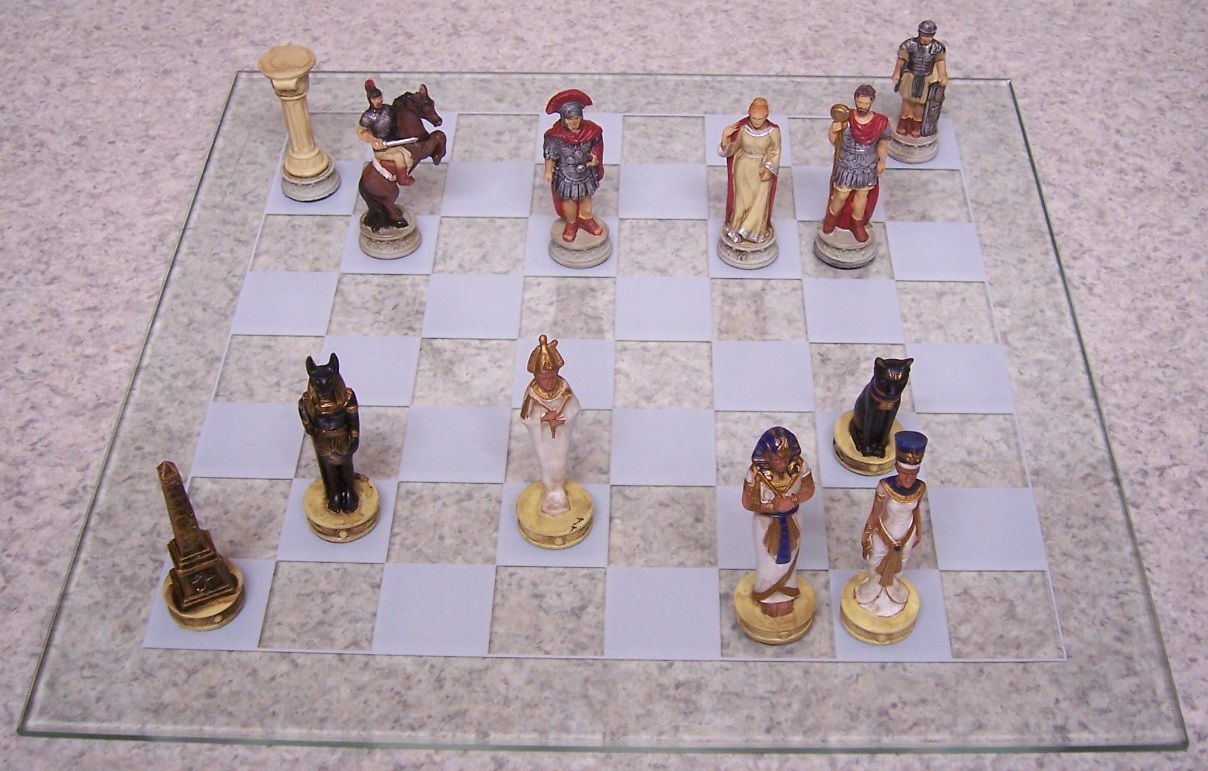 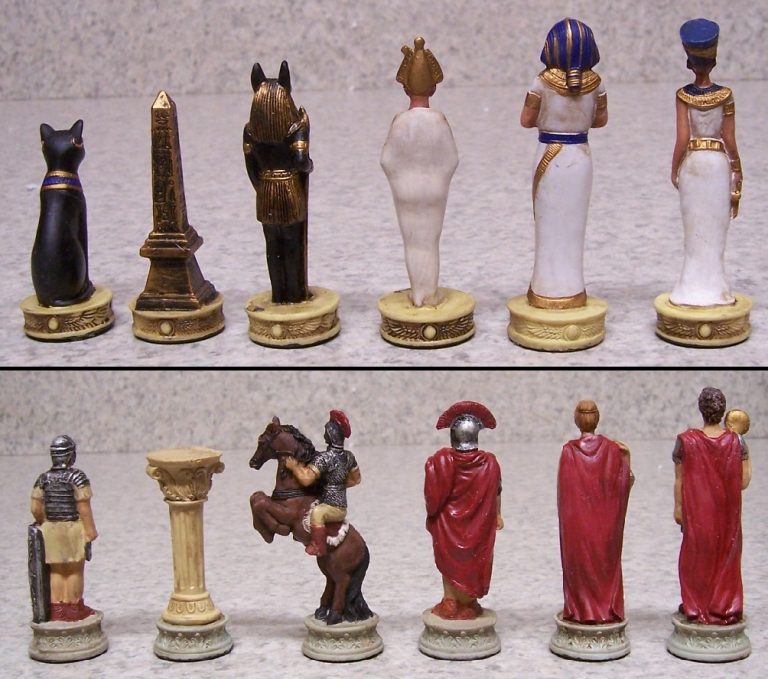 This set is very similar to the one above, save for the colours; each piece is hand-painted in vivid, life-like colours. Whether you prefer your sets painted or not, you can have your pick, and still at a good price! Pieces are made of polyresin, 3.75” each, board is made of glass and measures 17”x17”. $89.99 at amazon.

Resin is a less expensive material which tends to be quite durable – a good compromise, really. However, resin sets are not to everyone’s liking, not everybody enjoys the way it feels to touch, and some people voice durability concerns. But despair not! There are quite a few options for your tireless player who wants a set that will last long, and feel good. 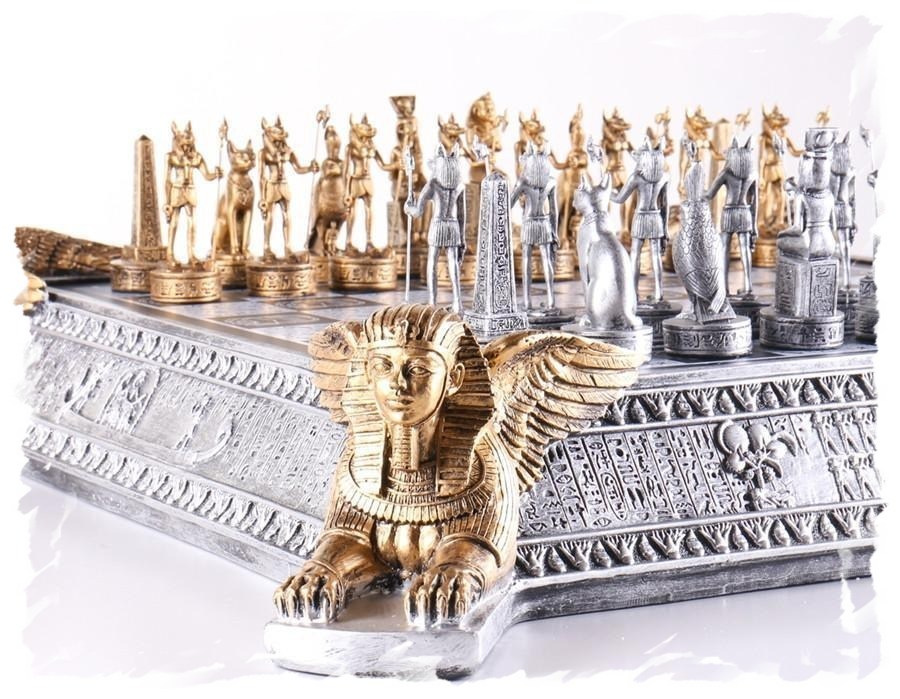 That one is not so budget anymore, however it certainly is one of the more beautiful sets out there. In this set both sides are Egyptian, so it is a “civil war” setup. Some may wonder whether that’s even remotely historically correct. It is indeed “historically correct”. Ancient Egypt has had many revolts in its long, nearly three thousand year long history, before finally succumbing to Romans in 30 BCE.

The board is certainly quite ornate; it is fairly rare for a board to be so ornamental. It also doubles as storage for the pieces. The material on that is also of a less usual kind; both the pieces and the board are made of polystone, which is a composite material made of resin and crushed stone. It makes the pieces more durable, and gives them a very stone-like feel, which is also an advantage! 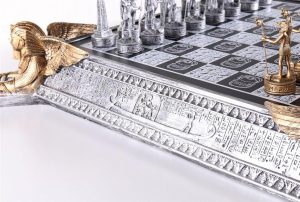 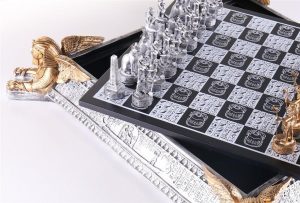 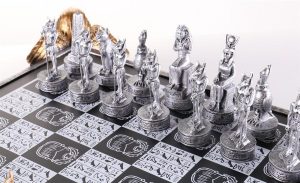 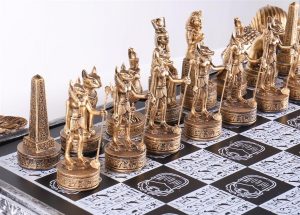 Since we are talking polystone, let’s have a look at another, perhaps more niche, set;

This one is truly of the higher-end variety; the board has a very traditional look, being made of maple and walnut. Pieces are, as above, set up for a civil war. However, those pieces are even nicer to look at (is that even possible?!), and the hand-painting is truly something different. As above, the pieces are polystone. This is truly a set for a refined chess – and Egyptology – enthusiast.

You can tell at the first sight that it is, indeed, a thing made to last, and to be enjoyed. The board is of a more classical design, with a nice glossy finish, while the pieces are made of a metal alloy composed of zinc, aluminium, magnesium and copper. This is a “civil war” set, with both sides being Egyptian.
Pieces are metal alloy, each 2.5”-3.5”, board is MDF with a marble design, 17”x17”, $124.90 at amazon. You can also buy the pieces separately, without a board.

Now let’s get back from metal alloy to more mundane crushed stone composite. This particular set that we have found for you is also in a clearly distinct style; it does look as if it could have been dug up from an archaeological site just a couple days ago.

Their style is reminiscent of the Lewis Chessmen which have been created around the 12th century. Those are truly for people of very particular tastes.

Oh, and if mixing cultural heritages isn’t quite your thing, they also have this Lewis Chessmen replica here; https://www.chessusa.com/product/2U-CV2.html

And with that set it is time to conclude our little excursion into ancient Egypt. Whether you consider chess historically appropriate in that context, or whether you think otherwise, chess as a truly timeless game does justice to the long and meandering history of Egypt.